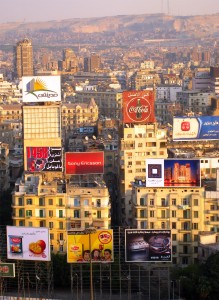 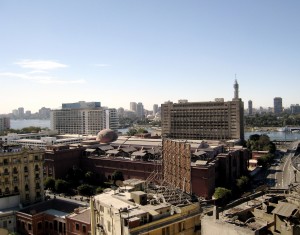 View from my apartment in Cairo

My inspiration to start non-profit work in Egypt came from an art exhibit, called Take Me to The River,  curated by Mansoora Hassan and created by artists from The Millennium Art Center.  I traveled with this exhibit to Cairo and eventually the show came back to be on exhibit at MAC, in Washington, DC  in 2004. When we were there we all agreed there was no place to buy quality crafts or art work by local artists. At that time, we knew we were being forced to sell the Millennium Art Center property to The Corcoran and I thought maybe our next project should be international.  We decided to work with the Townhouse Gallery in Cairo and helped with several projects donating computers, books, sponsored exhibits and emergency funds.

The first group of pictures is when I worked with The Rotary Club of Giza Cosmopolitan and donated Apple computers to Universities in Egypt.  We were told by Apple that we were the first one to ever donate Apple computers to non-profits and Universities in Egypt.  The computers went to The School of Applied Arts & The Townhouse Gallery. Because of our donation others felt compelled to donate used computers.  We also have donated over 500 art, craft, design & architectural books to 4 different organizations in Egypt.

Our first outreach project was donating pencils and paper in the City of the Dead and Leper Colonies outside of Cairo. When I was walking around the City of the Dead, with my guide, children came up begging for something. I was told they were not begging for money but they were begging for pencils, pens and paper because they could not go to school unless they went with these supplies. I thought it was a simple enough problem to solve so I went to a stationary store the next day and bought out all of their pencils, pens and line paper. For $250 dollars we filled up the trunk and the back seat of a taxi with these supplies. We had them delivered to the school and the Leper Colonies so we knew they were not turned around and sold.  It was our hope that everything went directly to the children.  We heard that the children were very appreciative of the supplies.

One day I was at a party at the American Embassy and a man came up to me and said,

“You’re the pencil guy! You’re famous. Most people don’t know how to solve a problem in this country.  You see a problem and you solve it.”

I solved a problem for a short time in one small location.

We also had the first “Out of the Box” competition. This was created to help inspire Egyptians to design and create arts and crafts of their own to sell. There were three big prizes of $1,000, $500 & $250 & 10 individual $100 prizes. We had an invitation to any individuals in Egypt to create a box of their own design. Out of 40 boxes we chose 13 to be a part of an exhibit at the Town House gallery called “Somewhat Different” and organized by the Goethe Institute, Cairo, and the Institute Foreign Affairs (IFA), Stuttgart, Germany.

I’ve been working in Cairo, Egypt since 2002 and understand that there is a huge problem with the lack of connection between the Egyptian artists and tourists. There is a major difference of what is being sold as tourist souvenirs and fine works of individual artists. Wherever you go you find mass productions of poor quality work, as I would say, “Tourist Garbage” and a lot of it is made in China. There is a misunderstanding of what artists can produce. I want to support the best artists I have found over the years and make their work available to tourists.  In my opinion, tourists leave Egypt all the time unaware of the creative and talented artists whose artwork they left behind.

Working with dysfunctional organizations in Cairo has slowed my progress, but I hope to someday create a space where local artists can be educated in art and design and sell their work under one roof.  I would like to provide studio spaces, retail shops, classrooms and a restaurant to the artists and tourists.  My ideal space would be on a river boat on the Nile River because it would be fun and entertaining for both locals and tourists.

The following boats are examples of what is available for rent or for sale. 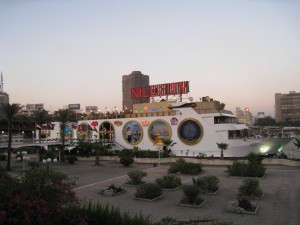 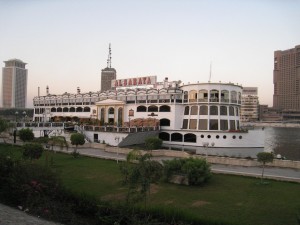